Is Hiring A Graphic Designer Worth It?

We could honestly spend hours discussing whether hiring a graphic designer is worth it. In fact, we will probably have several blog posts exploring the different facets of this question in the future. As graphic/web designers with formal education, plenty of self-taught skills, and over 30 years combined experience, we’re naturally inclined to say that of course we’re worth ‘it.’

But whether or not anything is ‘worth it’ to someone else is somewhat subjective. 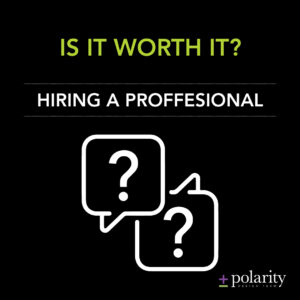 In most scenarios, our clients are asking about money. They want to know if spending money on a branding package is well spent and if their hard-earned money is being wasted. Starting or rebranding a business is expensive and time consuming enough without paying for shoddy, ineffective work. Shoddy, ineffective work is frustrating when it’s overpriced and even worse when it needs to be redone.

What Makes A Graphic Designer Worth It?

There’s a certain level of truth that goes into the phrase you get what you pay for. After all, that’s how things become phrases. When you spend $14 on a pair of shoes from your local supermarket, you naturally don’t expect them to perform as well or last as long as the $140 pair of sneakers you pre ordered directly from a brand name website. That being said, there are exceptions to every rule. Everyone has bought a cheap pair of sneakers that pleasantly surprised them. And everyone has been disappointed by an expensive pair of sneakers that did not live up to expectations. That’s all to say, you expect cheap items to behave cheaply, and expensive items to behave expensively with few exceptions.

Similarly, you may pay a stranger on Fiverr $35 and get the perfect logo on your first try, that comes in the right file type and size, and translates perfectly to screen print and embroidery. Alternatively, you may pay $2000 for a logo that you don’t even like and somehow still can’t be embroidered without significant changes.

To make your graphic designer worth it, you’ll need to do a little bit of research. Look at their portfolio and compare prices to other designers you like.

A worthwhile designer charges reasonably, listens to your concerns, and has enough expertise to at least understand that a logo made in photoshop is not usable if you need embroidery done.

We’ve had clients come in from both scenarios needing help. The former has unrealistic expectations of what good work costs, simply because they got lucky the first time. The latter is just grateful not to be writing checks with multiple zeros for work they can’t use. Both have mentioned whether or not their previous designer was ‘worth it’ and what made them so—it always came down to value. ‘Expensive’ work can be satisfying as long as the product looks, feels, and most importantly acts expensive (read: is effective). Conversely, ‘cheap’ work is seldom satisfying as it rarely lives up to basic expectations of what a branding package needs in order to perform.

Look for These Qualities

To ensure your graphic designer is worth it, there are ways to see what they’re like to work with. The quickest and easiest way is to check reviews — and not just on their site (no one is posting anything but glowing feedback to their own site). Check their Google reviews or their rating on other review forums. Beware of reviews that mention ‘hidden’ fees or surprise totals. As a bonus, look for reviews that mention problems that arose, how that company handled them, and if they made it right. Even the best designer is human, and so are their vendors, which makes occasional mistakes inevitable and sometimes beyond anyone’s control. But how they handle it is what separates a good designer from a mediocre or even bad designer.

Browse the websites of the designers you’re considering. You can gain a lot of information from a company by looking at their site. Their site should give a feel for their personality and what they’re like to work with, should have a robust portfolio of work to look at, and look professionally done. If it looks like a raw code website from 1998 that has multiple spelling errors and outdated services, it’s probably not be the designer for you.

Compare value. Not every website will have prices listed if they put together custom packages based on needs. However, they’ll understand that you’re looking for bids and you may be shopping around. Ask for a quote for what you’re looking for, as well as pricing for similar products or services they recommend. Get the quote in writing from each company so you have a general value comparison to look at. Ask questions and for clarification when needed. The designer will understand that this field is competitive and they need to win your business. A good company will give you all the information you need before billing you for a dime.

When Is A Graphic Designer NOT Worth It?

Story time. We had a client come in once a few years ago. We’ll call her Sally. Sally was starting up business and short on funds, so she shopped online for the cheapest designer she could find. Unable to find a local one that charged what she was willing to spend, she hired an overseas company who had prices that she could stomach. Language was a slight barrier, but they were able to communicate via email with very few problems.

There was, however, the problem of time zones. When her designer began their work day, it was 9 o’clock at night for Sally. When Sally got to work and replied, it was near her designer’s bed time, and she wouldn’t get a response until the next day. This meant every single communication, question, and mock up took a full 24 hours. A simple logo turned into a weeks-long process.

Then there came a snag in the design that was hard to explain via email. A phone call would have been beneficial, but was all but impossible with the time difference. Plus, it would have been expensive as there was no toll-free number. It was at this point that Sally called us, explaining that the saved money on hiring that graphic designer was no longer worth ‘it.’ She was ready to pay someone closer to home so she could communicate clearly, concisely, but most of all, quickly. It was at this point she told us hiring a local, though more expensive, graphic designer was well worth it.

Another client originally hired a competitor in town. She was frustrated because in their consultation, she drew a loose idea of what she envisioned on a napkin. They digitally rendered her idea identically, then charged her $2000 for it. In her other projects, she found them to be argumentative and hard to work with. Finally she decided that what she was getting was not worth the money she was spending. She hired us to finish her branding. Though this cost money on top of what she’d already spent, she thanked us for charging honestly for the work we did and for being easy to work with when she had revisions to be made. In this case, her original designer was not worth it, but hiring us was.

That Was A Lot. Is Hiring A Graphic Designer Worth It or Not?

We didn’t mean to rhyme just then. But the short answer is that it can and should be well worth it to hire a graphic designer. Do this by finding a designer who is knowledgeable and fair. Having a similar time zone helps a ton. A designer offers products, services, and knowledge you cannot get on your own by using a design app. But they also need to charge honestly for what they’re offering you. And, as always, no one can know what you’re thinking or expecting unless you tell them. Open communication about expectations and value between your designer and yourself is key to making your graphic designer worth it. Ready to talk about your project? Contact us here.

What is Marketing Collateral?

If you've worked with Polarity Design Team — or any agency — you've probably heard the words “marketing collateral". You...

Your Design is Only as Good as it is Readable

Any design is only as good as it is readable—and that’s a universal rule. Whether it’s a billboard, flier, or...

Logo placement is a concept that many of our new clients have questions about. They’ve put in the time to...

There are a bunch of reasons your brand needs to look pretty, but brand recognition is probably at the top...