Let’s discuss the importance of branding done right, right from the start. Rebranding is always a possibility when necessary, but it’s invaluable to avoid it whenever possible. It’s overwhelming and intimidating to new business owners to invest in the brand identity of their business. Logos, websites, signage, company colors and fonts. It’s a lot to consider. It’s a lot to pay for when funds are limited. Many business owners are so eager to get started that their mindset shifts to one of this is good enough for now, I can polish it up later.

Sometimes people are pigeonholed out of duty. Their sister-in-law is a freelance designer and they’re obligated to hire her. Except she isn’t educated in the field, she just happened to discover something she was naturally good at. So she delivers a logo made out of clipart that can’t be transferred to anything else because it’s not formatted correctly.

Or maybe you feel pressure to hire a family friend who just isn’t very good. He very clearly finds stock art to fit your concept and squeezes in, or you’re just unhappy with the finished look. But you stick with it anyway out of fear of hurting her feelings and causing familial and friendly strife.

This is fine for now. We’ll rebrand later.

Others are trying to save money and cut corners in an effort to get up and running sooner rather than later. A loose idea for a logo, constantly-changing fonts and colors, a makeshift sign. Sure, these things work in the meantime, but not as well as people would hope. And certainly not for as long as people assume.

A hand painted sign does not lend to business credibility. A varied logo, new color scheme, and different fonts on every piece of marketing material you put confuses customers. Is it the same company? Did they change owners? Are they trustworthy? 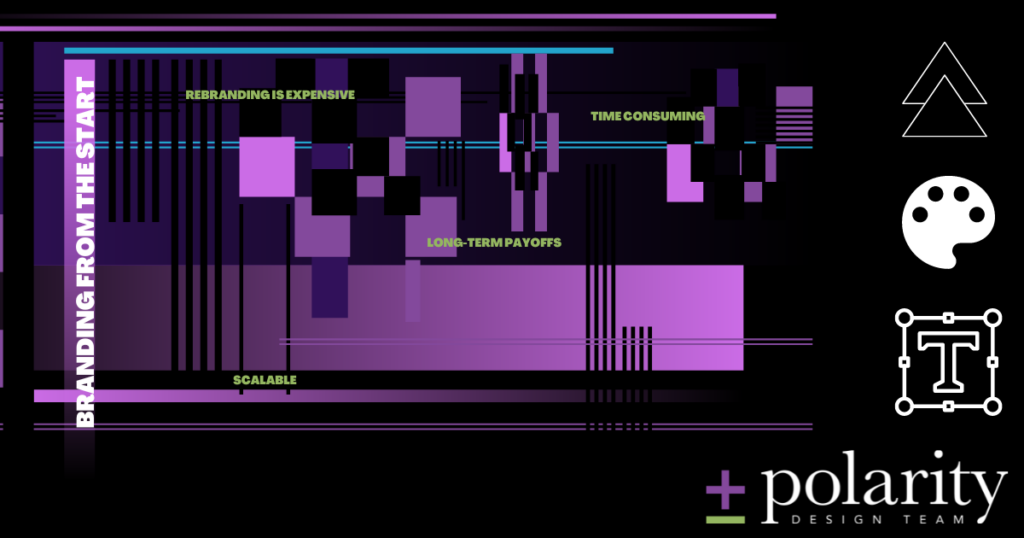 The hard truth is, if branding done right the first time is too expensive for you, your stomach is going to hurt when you start researching how much rebranding is going to cost. The problem is, the more half-baked material you put out there throughout the years, the more half-baked material you have to fix down the line. Each one of those items is a new bill and a fresh headache.

We’ve been working with a client who used a family friend as their designer to start out. They never imagined their business would take off like it did, and within a few years they had multiple locations. Then a franchise offer started. To reiterate the same point we made in a previous post, you simply can’t predict your future. Businesses are often surprised by how far they go and how quickly they make it there.

Though they did invest handsomely in branding beforehand, it branding they weren’t in love with. It was branding that didn’t invite growth. Their family friend was unable to produce the quality of work needed for a successful franchise. They needed highly recognizable, clean designs that matched their company’s message and this designer was unable to deliver.

All of these things weren’t big deals when they were just a local shop. In fact, a slightly unpolished look contributed to their small-town charm so it all worked out… for a while. Trying to scale to a national chain, however, needed big changes. They already had store signage. They already had business cards and menu boards and product packaging. Their current setup (which they never loved to begin with but were too nice to say anything about) had already been paid for. And all of it needed to go.

Now they needed a whole new branding package. An entirely new store-front vibe. New logos. Color adjustments. Menu board design changes. This was on top of the changes needed to scale their business into a franchise model anyway. They were already dealing with menu changes to better fit a national audience. They were already dealing with real estate issues and licensing  and figuring out franchise fees and all of that legal jargon. The last thing they wanted to be worrying about was making sure their branding was done right, which should have been done and finished years prior.

They learned a hard lesson that this all kind of…sucked. Not only were they paying for their branding (and subsequent rebranding) twice, but they were also spending time and energy on it twice. Time and energy that was much better spent in other places.

If only they had been more honest with their friend about not loving their designs. If only they had dared to dream of the success they were experiencing. But despite all of the ‘if onlys’ they were describing to us, they only direction they had to go was forward. It was an unfortunate learning experience, but as our owners are fond of saying, you don’t know what you don’t know. Now they do know, and they won’t make the mistake again. They’ll advise their franchise owners to not make those mistakes. Hopefully they’ll help keep you from making that same mistake.

The Value of Branding Done Right

What we’re saying is, cutting corners in the beginning only saves money right now. It’s invaluable to invest in ensuring your branding is done right the first time. Rebranding is expensive, in terms of both time and money. Not to mention frustrating, tedious, and comes with lots of growing pains amongst your customer base.

A company’s success is only as strong as their branding is solid. It’s worth it to have your branding done right from the start, because rebranding is frankly the worst. If you’re reading to get a branding guide together for your company, reach us here.

The Time to Order Client Gifts is Now

It’s surprisingly not too early to order your client (or employee!) gifts for the holidays now - even though we’re...

Can You Use Canva for Business?

You may find yourself asking: can you use Canva for business? Maybe you’re pursuing a fresh business idea but costs...

Got Your Final Design? Think Again

There’s so much more to choosing your final design than seeing a cool shape you love and running with it....

What is Marketing Collateral?

If you've worked with Polarity Design Team — or any agency — you've probably heard the words “marketing collateral". You...

Misinterpreted, or rather, differently interpreted, descriptive words are the source of many of our hours-long meetings. We spend these meetings...